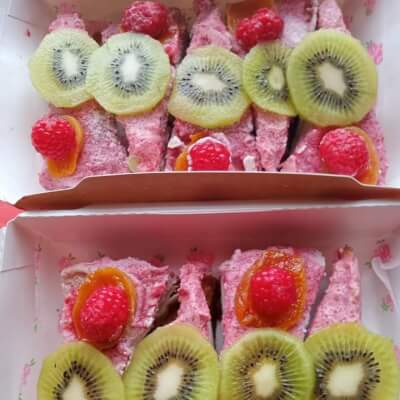 Raw Vegan Cakes health benefits reminder -
Initially set in the freezer, Liam's unique range of raw cakes consist of no added refined sugar, getting their sweetness from the natural sugars of the fruit or one of their countless other natural ingredients including Maca powder, Psyllium Seed Husks, Coconut Oil, Raw Cocoa (Kakao), Rice Malt Syrup and Beetroot Powder to name a few.

Known as the ‘ginseng of the amazon’ Maca is packed with vitamins, minerals, enzymes and is a complete protein supplement. It is also a so called adaptogen herb which contributes towards increasing the bodies resistance to stress and infections.

Furthermore Maca can be used as a strengthening and hormone regulating supplement for ‘PMT’, climacteric problems, deficiency of testosterone and an aphrodisiac.

Have a great capacity for absorption in raw cakes and at the same time add fibre which will contribute to maintaining a stable blood sugar level.

Coconut Oil contains a fatty acid called lauric acid known for its antiviral, antibacterial and fungicidal effect. Shown to increase digestion, and reduce the risk of cardiovascular diseases and high blood pressure. In order to form healthy hormones the body needs saturated fat and this is when coconut oil is a perfect building block, especially in the formation of the female sex hormone progesterone and the male sex hormone testosterone. Progesterone and testosterone also help to increase the formation of neurotransmitters such as dopamine ans serotonin which contribute to the overall feeling of well being.

Kakao contains an incredible amount of minerals and its antioxidant values are very high. Other substances include theobromine, a plant chemical related to caffeine and phenyle-thylamine which is know for giving a feeling of happiness and excitement and which increases concentration. Finally Kakao contains great quantities of magnesium which means it can be used as a muscle relaxing agent.

Rice malt syrup is made by a slow, natural enzymatic process, as the whole grains are partially broken down to yield a thick, rich, sweet liquid.

This special syrup contains about 30 percent soluble complex carbohydrates, 45 percent maltose,
3-4 percent glucose, and 20 percent water. The glucose is absorbed into the blood almost immediately. The maltose takes up to one and a half hours to digest, and the complex carbohydrates are gradually digested and released for up to four hours. Unlike other concentrated sweeteners, which are high in simple sugars, rice malt syrup provides a slow but prolonged source of energy that is calming and soothing.

Beetroots are fantastic sources of potassium, which help regulate your body’s fluids and also protect against water retention, a more frequent supply of unneeded additional weight. Furthermore, the dietary fiber found in beetroot naturally assists in making the body feel fuller for longer.
Its also considered to be a promising therapeutic treatment in a wide selection of clinical diseases related to oxidative stress and inflammation.