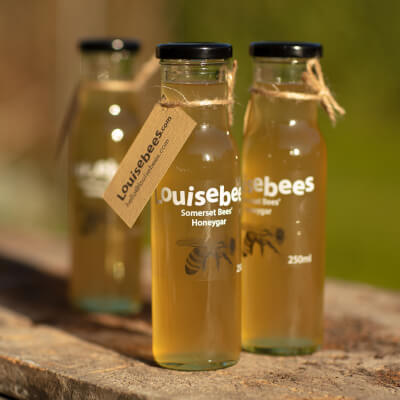 We use organic raw apple cider vinegar with the 'mother' and mix it with Somerset Bees' raw Borage honey.

Honeygar is a 50 / 50 mix of honey and vinegar. It was originally formulated as a health tonic for those following an alkalising diet. Some people believe that it reduces the symptoms of arthritis, due to its alkalising effect, but there is no scientific evidence to support this.

Borage is an annual plant grown for its seed. The oil from it is marketed as Starflower and it contains the highest levels of GLA so far discovered. It has a wide range of medical benefits. Bees are very attracted to borage and the honey they make from it is very pale and delicate.

Use as a daily tonic or a light salad dressing.

Shake to combine. Store in a dark, cool place. Use within 3 months