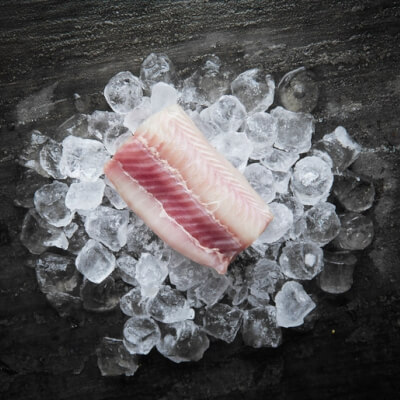 The story of the much-neglected dogfish sticks in my memory. On my first ever boat trip back in 2004, in amongst all the many beautiful and delicious fish we caught on the Lady Hamilton that day, the most numerous were the dogfish, possibly close to 40% of the entire catch. The fisher on the Lady Hamilton landed his, but this was unusual, most fishers simply throw dogfish back into the sea as they are considered worthless in the UK. If they are landed at all, they are more often than not used for pot bait by the crab fishers. Dogfish don’t have a swim-bladder, which means they have a reasonably good chance of survival if thrown back into the water, it also means that once landed, they can take a very long time to die. My over-riding memory of this boat trip was of the dogfish some 10 hours later on landing, still writhing at the bottom of the fish box. Without doubt, a more humane way of killing fish needs to be developed; slow suffocation is not a good way to go, but when compared to being gutted alive, slowly bled to death or having a large chunk of your body eaten by a predatory seal, the choice of a good death as a fish remains a distant prospect…

Gruesome death aside, these fish are worthy of being honoured at our dining tables. Smoothhound and the lesser-spotted dogfish are the two species that our fishers catch.

Dogfish are part of the shark family, and are cartilaginous fish like skates and rays. They are also distinguished from bony fish by the way they breed. Reproduction in most sharks is a very slow process as they have a late age of sexual maturity, produce few young and have a long gestation period. No maternal care is provided to shark pups, instead they are well-developed and ready to hunt when born in order to maximise their chance of survival. All shark eggs are fertilised internally, the lesser-spotted dogfish eggs are held within a leathery case known as a ‘mermaids purse’, while the smooth-hound develop embryos within the mother and are provided with nutrients from a placenta.


Sustainability
World-wide sharks are being removed from our seas at an alarming rate. Sharks are slow growing, long-lived with low reproduction. Finning is perhaps the most damaging and distasteful of all shark fisheries. The process is cruel and wasteful, involving the removal and retention of fins, while the rest of the shark, is discarded, often still alive, to drown or be eaten. Finning takes place all over the world (including Europe) to feed the continual and increasing demand for sharkfin soup.
Smoothhound is one of few shark species whose numbers appear to be stable at present. Unlike many similar sharks, their relatively high productivity means that there is potential for this species to be harvested sustainably. However, data is lacking on their biology and level of fishing on the species, which makes it difficult to manage them effectively.
The Lesser Spotted Dogfish ‘mermaid purse’ eggcases are found in large numbers throughout the UK and Ireland. Perhaps one of the most abundant sharks in the UK, it is often considered a nuisance by commercial fishermen and anglers, and ends up as pot or creel bait.
The Squalus acanthias (Rock salmon) and Scyliorhinus stellaris (Nursehound) are not species we buy as these are both vulnerable to over fishing and are ‘Red’ rated by the IUCN as ‘near threatened’.

Though widely eaten in the Mediterranean, the dogfish is commercially worthless in the UK, and we attribute much of this to the difficulty in processing the tough, abrasive skin. We stress that our fishers don’t actively target dogfish, but if they catch them, we pay a fair price for them, and painstakingly process each one by hand, to create a nutritious and delicious fillet of fish.

Deep fried in beer batter has to be the way to go in the UK – ‘rock salmon’ was once a firm favourite in every chippy. Because of its delicious cartilage (shark cartilage is said to reduce symptoms of painful joint conditions, especially arthritis), dogfish also work really well in fish stews or chowder, with the cartilage creating a gelatinous liquid, and the flesh remaining firm and meaty. Diced in kebabs on the summer BBQ also works really well.