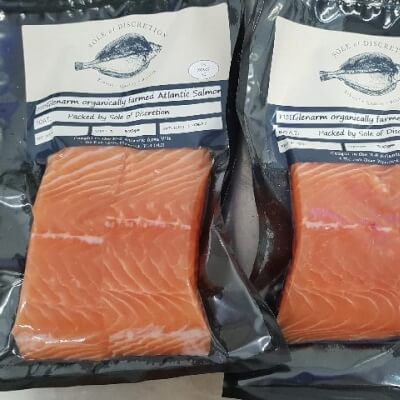 Many of our customers ask for farmed salmon, so we’ve worked on supplying some of the best available. Farmed fish are a contentious choice however, so here are our thoughts on this complex issue.

Sole of Discretion generally encourages people to move away from farmed fish and eat wild fish as an alternative, from both a public health point of view and damage to the marine environment.

The Environment
Farmed fish are often marketed as being the sustainable choice, but nothing could be further from the truth for many carnivorous species, such as salmon. Unlike sheep or cows that turn grass into animal protein, salmon are voracious carnivores and eat other fish in their natural diet. In the wild, they feed on shrimp and small fish, and it’s the shrimp that gives them their incredible colour. Farmed salmon, in some of the poorly managed farms, can eat as much as 12kg of wild fish for every 1kg of farmed salmon produced, clearly a drain on wild resources (though we are not advocating replacing fish in a salmon’s diet with yet more vegetable oil!). As wild fish stocks dwindle, the salmon farmers have tried to find alternatives in their feed, ranging from algae to insects, and increasingly, vegetable oil. Like any form of farming, feeding an animal something that doesn’t appear in its natural diet has its risks, (think BSE). While replacing fish with vegetable oil in a salmon’s diet might help alleviate the demise of wild fish stocks, we question what health benefit it might have for the consumer, not to mention the impact it has on taste.
Just as importantly, there is an ethical question here, too; many of the wild fish turned into fishmeal are caught by developed country’s industrial fleets in the developing world’s fisheries. There are plenty of examples of European boats buying the fishing rights to fish off the fertile north African coast, leaving the locals in Mauritania, Senegal and Morocco no longer able to fish in their own waters. One wonders if this contributes to some of the economic migration, with young men unable to earn a living in their own fishing communities being forced to look further afield for work, risking their lives for the chance of a better future in the West. Of the annual 50 million tonnes of fish landed globally per year by the industrial fleets, over half, 26 million tonnes are turned into fishmeal and oil*. While farmed fish may be considered a sustainable choice for the privileged developed world, clearly from the developing world’s point of view, taking their fish to turn into fishmeal to produce cheap salmon is not an equitable share of resources.

Pollution is another problem. The salmon farms create pollution from the feed, fish faeces and chemical introduction which all has impact on the surrounding marine environment.
There are also questions over the problems of farmed salmon escaping and breeding with wild fish impairing their future ability to breed.

Public health
Farmed fish are also vulnerable to disease, and the chemicals used to prevent the growth of lice or antibiotics used to treat other illness are potentially damaging to human health. Growth hormones to shorten the time to harvest are also a concern for public health. Plus, many intensively reared salmon producers put a high ratio of vegetable oil in the diet, because it is cheaper than fish protein and helps speed growth.

However, there is a balance to be drawn when considering wild and famed fish from the point of view of health, as many wild species are now suffering from the effects of pollution in the sea, and carry high levels of mercury or PCBs in their flesh. As mercury and PCBs accumulate, the larger, older fish tend to carry these harmful chemicals, so tuna steaks and swordfish for example, two species near the top of the food chain, are often the most adversely affected by chemical pollution and should be consumed in small quantities. Environmental contaminants (PCBs, mercury, dioxins etc. ) are stored in the fat cells of all animals (including humans). Reducing the oil content in the salmon’s feed reduces the possible exposure to environmental contaminants, which are used heavily in cheaper salmon production plants.

Another benefit in limiting the fish oil content in the salmon feed is that the fish are receiving a diet that is as close to that which they would encounter in nature and as a result the fish grow at a natural rate and will exhibit enhanced muscle development and a brighter, cleaner flavour. The high-energy feeds used in intensive conventional farming will produce a market-sized fish in considerably less time. But the fastest way to get fish to market is to genetically modify them, and that’s what happened in 2015 when the US’s Food and Drugs Administration approved the introduction of the world’s first genetically modified salmon.

Glenarm Salmon
Glenarm Salmon is a Northern Irish business. Glenarm Salmon are nourished on a diet containing only natural and organic ingredients and are free from GMOs. The organic diet is manufactured locally in a small feed mill no more than fifteen miles from the farms. Organic farms can only use approved certified organic feed. The UK basis for certified organic feed is the re-cycling of fish protein (other than salmonid species) from human food processing. Furthermore, all vegetable matter used in UK Organic feed must be certified Organic and be free of any GMO and animal proteins (e.g. beef, pork, poultry or sea mammal proteins). Finally, the overall fish oil content in the fish feed cannot exceed 28%. In conventional feed the oil content may be as high as 45% in “high-energy” feeds used to accelerate the growth rate of the fish.
Shelf Life: 5 Days
Dairy Free Gluten Free Nut Free Wheat Free
← Back To Sole of Discretion CIC
© 2020 — NeighbourFood. All Rights Reserved.
How It Works Become A Producer
Basket 0 Sign-In Join Now
Version: 20200915.2
Environment: ProductionUK
Process Id: 6076