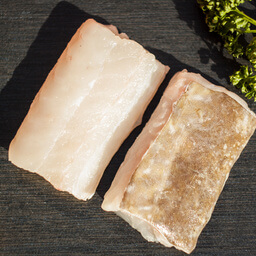 Ling is a deliciously dense textured white fish, good in curries and stews.


Cooking Instructions
Preheat the oven to 190C / Gas 5. Wrap the fish in a foil parcel with a knob of butter and a squeeze of lemon. Bake for 12-15 minutes, until cooked through.

Ling is the largest member of the gadoid or cod family. It is a demersal species (fish that swim close to the seabed) found mainly on rocky bottoms. Spawning areas are Biscay, the slopes west of the British Isles and off the Faroes and Southern Iceland. They can reach up to 2m in length, 45kg in weight and can live to 25 years of age. Ling are found between 100 m and 1000 m depth but most commonly between 100 m and 400 m; younger fish are often found inhabiting the shallowest end of their depth range and older individuals found at greater depths, although these fish move into shallower water to spawn. An active predator, ling feeds on other fish species such as cod and herring and will also feed on lobsters and other invertebrates. Life history traits are in line with other members of the gadoid family and as such ling is less vulnerable to fishing mortality than typical deep-water species, though the Marine Conservaiton Society rates Ling as a fish to avoid.

When looking at the status of a stock, SoD believes it important to view the ecosystem in its entirety, rather than focus on individual species. This is one of the primary reasons that we favour using method of catch over species to determine what we will offer to our customers, in the understanding that fishing methods play a large role in the health of the entire ecosystem, and hence the stock.

For stock level we look to take into account the impact that fishing on one species has on another, and secondly whether or not that stock is in danger of collapse. These are the two major criteria. If you don't do the first, then as species fluctuate up and down against each other against the total ceiling that the seas can support, you will have a constant stream of species that are sold as sustainable fisheries that will be stopped as stock size shrinks below conventionally accepted levels and becomes a choke species (a quota species that even when not targeted, the species get caught anyway and prevents the fisher from then fishing for non-quota species, or for species they have plenty of quota for).

SoD therefore favours looking at the individual catch method of the fisher, and determines through that which species and size of species is acceptable. For example, a small ling caught in a gill net would not be acceptable, because it implies that either the mesh size the fisher is using is too small, that the soak time is too long, or that generally he is fishing without integrity, skill and knowledge. If on the other hand a handliner caught a small ling we would accept that on the basis that the overall impact of a handliner is the least damaging to the sea’s ecosystem, and our policy is not to discard or waste unpopular species or sizes of species, and that the condition of the overall stock status is driven not by the techniques of the handliners but by some of the larger fishing vessels that catch vast tonnage of one species in one haul.

Our desire to preserve the small scale fishers is guided by Slow Food’s principles that we should continue to find a market for their fish even though the species is under threat (though this view changes with critically endangered species) as if these fishers give up, we are in danger of losing their skills and knowledge forever, and our only alternative will be fish caught by large, industrial and more damaging fishing vessels. SoDs Ling this month is being caught exclusively by the handliners. They are targeting pollock, cod and haddock but in so doing will also fish ling. Bigger boats might discard the ling as it is a relatively undervalued species, but it is SoD’s commitment not to waste any of a Fisher’s catch and eat everything they land.

Analysis by : McCance and Widdowson