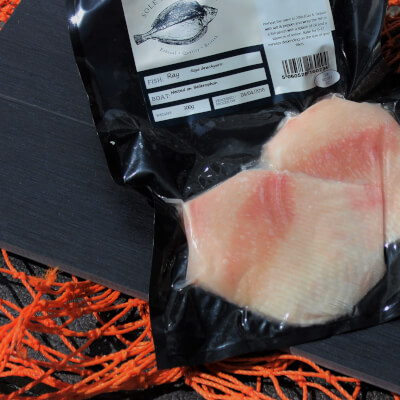 Ray wings or knobs (the ray cheeks) can be simply cooked by placing the wings on foil, squeeze over lemon juice, a little lemon zest and drizzle a tablespoon of olive oil, tightly seal the foil into small parcels and bake in an oven for 15 minutes at gas 6 / 200C. Ray wings are also tasty when poached and classically served with a brown butter sauce.

Rays are large flat fish, dwelling close to the sea floor. Like sharks they have cartilage skeletons instead of bone. Often confused with skate, that tend to be large with long snouts, rays are smaller species and have short snouts. They are slow to grow and breed which is why we need be cautious when fishing for them.

In general, skates and rays are inherently vulnerable to overfishing due to slow growth rates, late maturation and low fecundity. In addition, little is known about the stock status of many individual species because they have been historically landed under a generic skates and rays category. Because of the mesh size our fishers use, immature fish are not caught. Undulate ray in particular was listed as a prohibited species and landing of the fish was only re-introduced from 2015 in sea areas 7.d and 7.e.
Surveys by ICES show that stocks had increased recently, and hence the species were reinstated. Like many of the rays, undulate ray has a coastal distribution, can be the predominant skate species in parts of divisions 7.d and 7.e and is an important species for inshore fleets. We avoid catching these species below the size at which they mature, as a guide our fishers are advised to land a fish no less than 45cm from wing tip to wing tip.