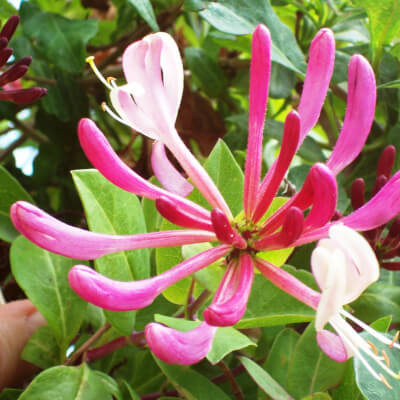 View Frome Food Hub Market Collection
One of the earliest flowering honeysuckles. Dense flowerheads of red-flushed white tubular flowers which age to a creamy yellow clothe the twining stems from May to June. The large, cartwheel shaped flowerheads are fabulously fragrant, especially at dusk and may produce large bunches of shiny orange-red berries in late Summer.
A deciduous climber, it is is fully hardy and will grow in any soil but, would prefer a little shade on its roots.
Quick to cover a fence, or wall or scramble over an old tree stump, it looks great in a cottage-style garden. It has slightly larger flowers than the Wild Honeysuckle and more of them.
It's also one of the first plants to break into leaf, often as early as January.
RHS - AGM (Royal Horticultural Society - Award of Garden Merit).
Height 7m.
Available in a 1L pot.
Shelf Life: 12 Months
← Back To Wild Thyme
© 2021 — NeighbourFood. All Rights Reserved.
How It Works Gift Vouchers
Basket 0 Sign-In Join Now
Version: 20210420.1
Environment: ProductionUK
Process Id: 6364